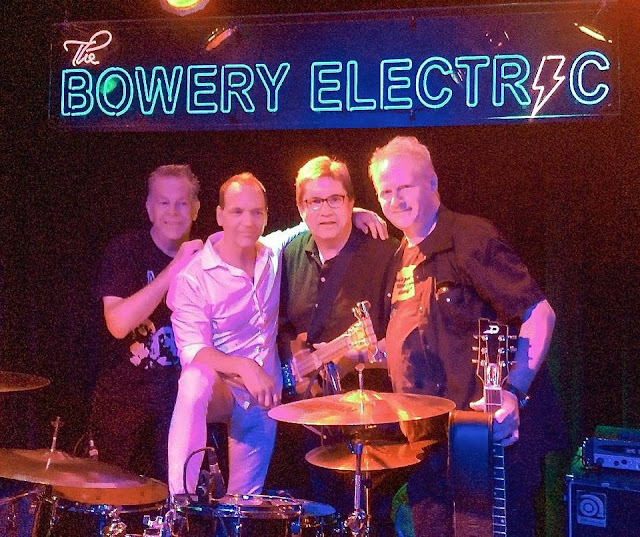 It was all too fast and like a blur... BUT it was a fantastic half-hour hard rocking power pop set.
It still tugs at the heart to see the same guys on that strip of concrete only a block up from CBGBs, killing it.  For me, it was 32 yrs ago and change when my brothers drove me to the Bowery (CBs) to see Screen Test (3/4 of The Flashcubes).  It was then and there where my official NYC rock club experience began.
Tonight's reunion of the Flashcubes was a great reminder of how rare and precious a band they are: All the same four guys (Gary Frenay, Arty Lenin, Paul Armstrong and Tommy Allen) who played Max's Kansas City with groups like the Misfits (super early days), The Scruffs, and The Fast.  All four playing as tight, fast and loud as if they were half their age.
A monstrous cover of The Move's "Hello Susie" proved to be the pinnacle of a set on fire from the word go to the last note of their closer, a ripping version of Eddie & The Hot Rods' "Do Anything You Wanna Do."
The Hipp Pipps followed suit with a feral set of pure NYC street-fueled rock and roll; all in tow with a vibe that felt like the true living breathing artifact. This night was not some dull aging dad rock scene.
Extra points to the DJ (Twig The Wonderkid) who cranked classic Mott The Hoople, Blondie, 20/20 ("Jet Lag"!), Vibrators, Tom Robinson Band, The Undertones, The Beat (Paul Collins, who was there in attendence), Rich Kids, and Radio Stars.
What a perfect way to celebrate the legacy of one of rock and roll's most legendary clubs.